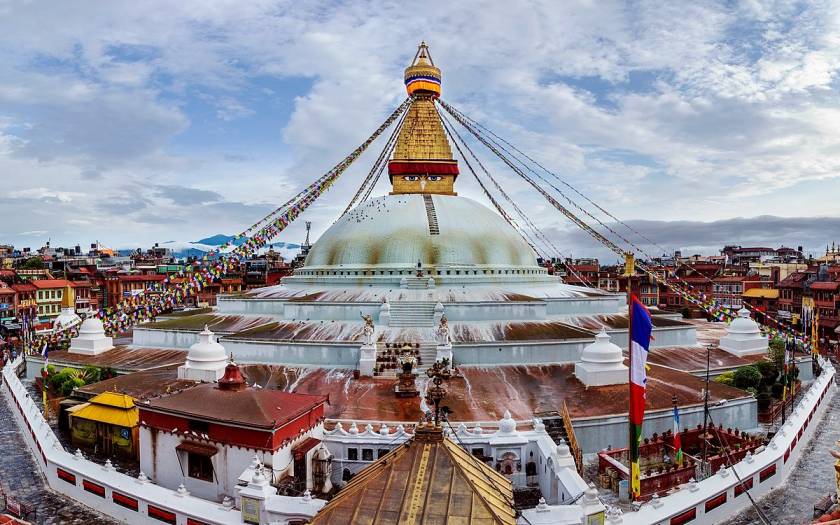 Nepal is a surprisingly diverse country that attracts visitors for many reasons. Some are lured by the call of the mountains and seeking to climb or trek in the Himalayas, others are intrigued by the culture and the famous city of Kathmandu, and yet others come hoping to find some sort of spiritual awakening. 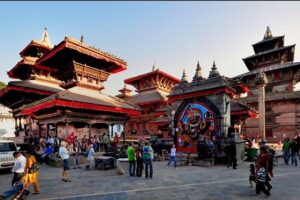 Kathmandu, the capital and largest city in Nepal, is like no other city in the world. The decaying buildings in the heart of the city are a stark contrast to the lively atmosphere that permeates the streets. The smell of incense wafts from stores while street sellers push their goods, and people go about their daily lives, all against a backdrop of historic temples and carved statues.

For several hundred years, Kathmandu was one of three rival royal cities, along with Bhaktapur and Patan. Situated in close proximity to each other, today these three almost run together.

The highlight of Kathmandu has long been Durbar Square, the largest of the palace squares in the three royal cities and a UNESCO World Heritage Site. Temples and monuments of varying shapes, sizes, styles, and faiths can be found here.

Kathmandu’s Durbar Square was severely damaged in the 2015 earthquake, with many buildings destroyed beyond repair, but it still remains a special place to visit. 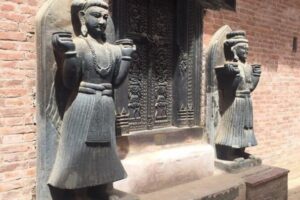 Bhaktapur, the third of the “Royal Cities,” lies on the old trade route to Tibet, just outside of Kathmandu. For Bhaktapur, the trade route was both an arterial link and major source of wealth. Its relative remoteness at the time allowed the city to develop independently and in ways which distinguish it from the other two cities.

In contrast to Patan and Kathmandu, the population of Bhaktapur is primarily Hindu. The best place from which to begin a tour of the city is Durbar Square, where in addition to the royal palace, several temples are also situated. The whole area is a UNESCO World Heritage Site.

Many of the buildings in Durbar Square in Bhaktapur were damaged in the 2015 earthquake, the main temples are close to being repaired fully, but progress on much of the surrounding area has not proceeded as swiftly. 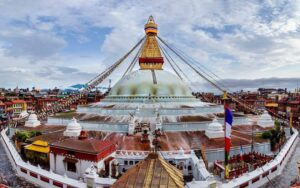 The Bodhanath Stupa, just outside Kathmandu, is one of the largest stupas of its kind in the world and dates to some time around the 6th century, possibly even earlier. Like Bhaktapur, it lies on the old trade route to Tibet and is a UNESCO World Heritage Site.

The stupa itself is a symbol of enlightenment but at Boudhanath the symbolism is particularly clear. Each different shape represents one of the five elements, earth, water, fire, air, and sphere, which are also the attributes of the five Buddhas. Brought together in the form of the stupa, their unity reflects in abstract fashion the structure of the universe itself.

The stupa sustained minor damage during the 2015 earthquake and is now fully repaired. 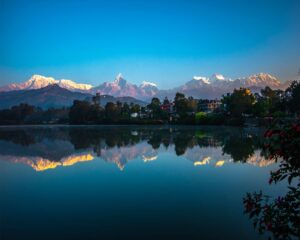 Set at the base of the foothills and surrounded by some of the highest mountains in the world – Dhaulagiri, Manaslu, and Annapurna I – Pokhara is one of Nepal’s most scenic cities. For trekkers, Pokhara is the gateway to the Himalayas and the starting point for treks to Jomsom and the Annapurna region. It’s also a wonderful spot to relax for a bit, either before or after a hiking trip.

By population, it is the second largest city in Nepal after Kathmandu but still does not feel like a big city. As you travel from Kathmandu, 200 kilometers to the east, you’ll notice the much cleaner air and pleasant climate almost immediately. Lake Phewa, with its cluster of lakeside hotels, restaurants, and shops, is ideal for those looking for a little relaxation.

5. Trekking in the Annapurna Region 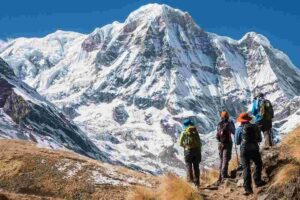 The Annapurna Region is one of the most popular trekking regions in Nepal, with options that range from a few days to a few weeks. Three main routes in the Annapurna Region intersect and combine in places, and you can opt to do a portion or a variation on the routes. The routes are well marked and easy to follow.

The Annapurna Circuit around Annapurna Mountain takes about 21 days to complete and is incredibly popular with people who have enough time. This route is sometimes called the “Apple Pie Circuit,” in reference to the fact that most of the teahouses along the route serve their own version of fried apple pie.

A popular hiking destination in this region, often offered in hiking packages in combination with the Annapurna Circuit, is the trek to Poon Hill (3,210 meters) near Ghorepani. Most hikers try to be on Poon Hill early to see sunrise and a stunning view of Dhaulagiri, Annapurna South, Machapuchare, and Singa Chuli.

In many regards, the Annapurna Region, north of Pokhara, is an ideal walking area. The dramatic contrasts of the Nepalese countryside are especially visible, from the subtropical vegetation of the Pokhara Valley to the dry rain shadow area, with features of the Tibetan plateau. The people and cultures are also very different: facial characteristics, food, houses, lifestyles, customs, and religion.

The Annapurna region was declared a protected area in 1986. Most importantly, it has a good infrastructure to support the many trekkers that come through this area. The paths are well maintained, and food and lodging are plentiful.