BTS members are finally getting the hang of Instagram. Be it RM, Jin, Suga, J-Hope, Jimin, V or Jungkook, the Bangtan Boys have been driving ARMY crazy with their Instagram posts. And that’s what they did today. However, we are here to talk about three of the BTS members’ posts, that is, Jin (Kim Seokjin), V (Kim Taehyung) and Jungkook (Jeon Jungkook). The three of them shared posts matching their personalities and ARMY has been going crazy over the same. Also Read – BTS member Kim Taehyung reassures fans of Jimin’s recovery, Victoria Beckham’s shout-out to Deepika Padukone and more Trending Hollywood News Today

First up, let’s talk about Jin aka Mr Worldwide handsome. Jin dropped a picture with a huge shrimp in his hand. He had messy hair spread over his forehead. Jin looked as handsome as ever even without makeup. And ARMY couldn’t stop fangirling over his unkempt hair. Jin posed with the shrimp in his hand as though on a phone. He is such a cutie. Check out Jin’s post here: Also Read – BTS: Kim Taehyung aka V assures ARMY that their ‘chick’ Jimin is recovering well; reveals about morning video call

Next, we have BTS V aka Kim Taehyung. The Christmas Tree singer shared two posts on his Instagram handle. First up is his adorable post with Yeontan. It seems they went to a temple to pray. We see V holding Yeontan in the picture. Taehyung captioned the post saying, “Kim Yeontan, you made a wish, right? Your wish is my wish.” He also shared another post in which he reshared the deleted picture post. This time he added a couple more pictures with it. And last but not least, he put up and story from his studio. He shared Homer Simpson’s gif on the story. Check out Taehyung’s posts here: Also Read – BTS: TaeJin aka Taehyung and Jin’s Tom-n-Jerry camaraderie on Shahid Kapoor-Sonakshi Sinha’s Mat Maari is too entertaining

And last but not least, we have our Golden Maknae aka Jungkook. The Stay Alive crooner shared a dance video on his Instagram handle. He is seen dancing to Bare Wit Me by Teyana Taylor. The choreography is by Just Jerk Crew member Nain. The latter was surprised to see Jungkook attempting her choreography. The Golden Maknae was absolutely effortless in his moves. Check out the video below:

As soon as JK dropped the video, J-Hope commented on his post saying COOL. Jungkook took a jibe at him asking whether he lived on Instagram. Hobi has been the quickest to respond to members’ posts and it has become a funny thing for BTS and the ARMYs. 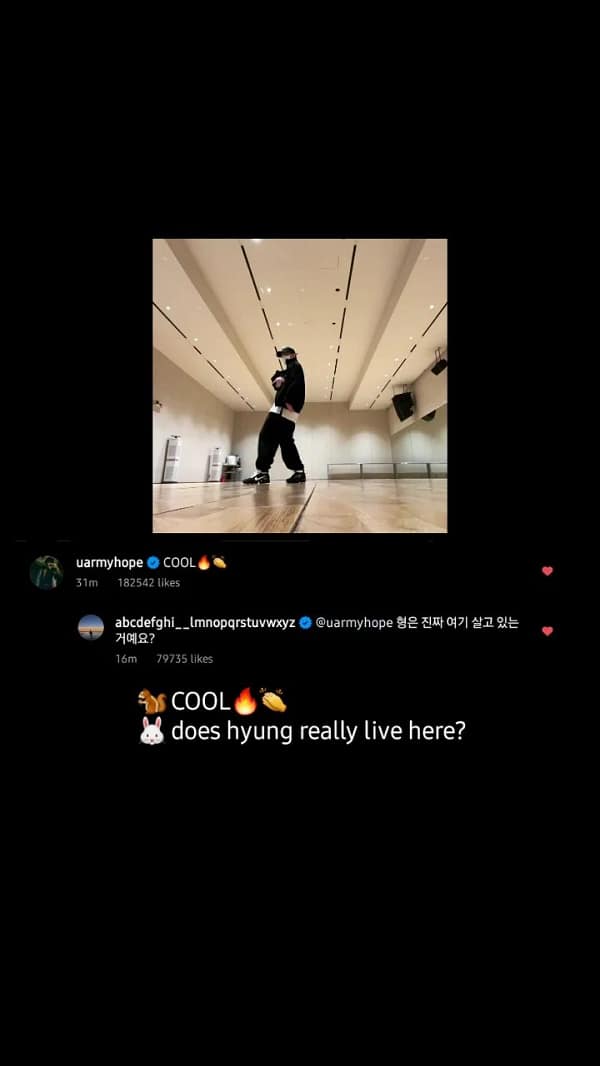 a very impressive squid yes but jin, have you considered how the swoop of your unstyled hair is even more devastating https://t.co/G2Z2kXlsiC

How is this fair Jin with no makeup and hair not done still looks way to beautiful. When I don’t have makeup on or fix my hair I look ugly. Life isn’t fair but at least he is beautiful others wish they could look this good. Me I am others. pic.twitter.com/11HWu72ikQ

Jin looks so fluffy? but also, I can bet he can tie his hair up ? pic.twitter.com/hrO1DKqHuz

Whoever clicked this …
THANK YOU ..?
KIM TAEHYUNG’S SMILE IS CUTE! ?? https://t.co/yoaDbyyJj5

I wish to be inside your head to see what are you thinking about#TAETAE #TAEHYUNG #BTSV @BTS_twt pic.twitter.com/94bkGtbueO

Not Taehyung reposting the boyfriend pic but with other snow and wine pics to add on to the concept ? pic.twitter.com/0AIdOzDoCX

TAEHYUNG AND YEONTAN ARE MY SWEETEST BABIES FOREVER

BITCH IM FUCKING CRYING OMG I LOVE JUNGKOOK SO MUHC AND ITS THE FACT THAT I WAS JUST LISTENING TO THIS SONG YESTERDAY pic.twitter.com/2QkMMWeakr

WTF JUNGKOOK WHY IS HE SO COOL DAMNNN https://t.co/ZZbWgNoCOC

Jungkook calling out JHope like that??? meanwhile Army loves being included in the BTS GC so please continue Hobi ?? https://t.co/m99YRDFx9A

Meanwhile, BTS are on a break. They have been sharing pictures that hint at them working on something. Individual or BTS album, ARMYs keep guessing with no concert answers. Meanwhile, we will soon have the Soundtrack of 7 Fates Chakho produced by Suga aka Min Yoongi and vocal provided by JK.