Siddharth Nigam shares a picture with Kangana Ranaut; after Avneet Kaur is he doing a project with the Bollywood diva? - News Box India

Siddharth Nigam shares a picture with Kangana Ranaut; after Avneet Kaur is he doing a project with the Bollywood diva? Kangana Ranaut has launched Avneet Kaur in Bollywood with her movie, Tiku Weds Sheru. The actress is known for her music videos with Riyaz Ali and her show, Aladdin. On the show, she played the role of Princess Jasmin. Avneet Kaur and Siddharth Nigam’s jodi is one of the most loved in the TV industry. Fans have christened them as #SidNeet. In fact, they are waiting for the fourth season of Aladdin. Actress Ashi Singh replaced Avneet Kaur on the show. Now, Siddharth Nigam has posted a picture with Kangana Ranaut. We guess he met her somewhere and had his fan moment. Also Read – Kangana Ranaut reality show Lock Upp: Post split with Sushmita Sen, Rohman Shawl to be seen on Ekta Kapoor’s OTT show

Kangana Ranaut has given Avneet Kaur a good break with Tiku Weds Sheru. Let us see if she gives a smashing project to Siddharth Nigam as well. Whether it is Samrat Ashoka or Aladdin he has shown his acting prowess. Siddharth Nigam has a great body and is a terrific dancer too. Take a look at his pic with Kangana Ranaut. Also Read – Kangana Ranaut’s Tiku Weds Sheru co-star Avneet Kaur brings home a swanky car worth Rs 80 lakh; pens ‘dreams coming true’ [VIEW PICS] 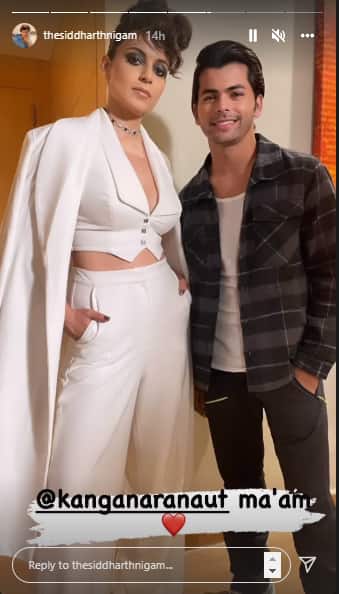 Kangana Ranaut was seen yesterday at the launch of the new reality show Lock Upp for ALT Balaji and MX Player. Ekta Kapoor is the producer of the same. Siddharth Nigam was down with dengue for close to 20 days. He had to receive IV at home for the same. The actor said that he needed to hit the gym to get his rock hard abs back.

Avneet Kaur was present with Kangana Ranaut for the house-warming party of Nawazuddin Siddiqui. The actress and Siddharth Nigam are great friends. Let us hope for a good announcement soon!

From Loop Lapeta to Gangubai Kathiyawadi, upcoming Bollywood movies to enjoy in February 2022